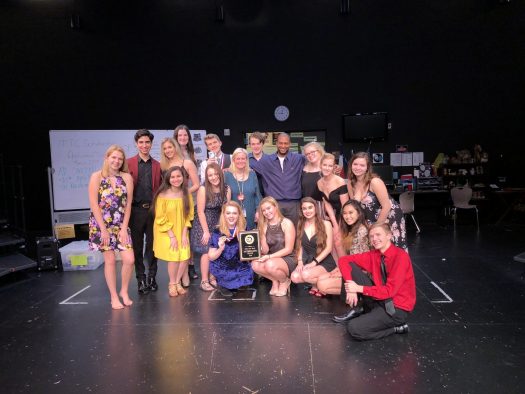 The Tompkins Theatre Company has had a busy year as they worked to put together Shrek and shortly after, Rabbit Hole. On March 10 they competed at the district UIL one act play contest at Katy High School with their performance of Rabbit Hole. In order to stand out from their competition, the members of the theatre took a risk and incorporated american sign language into the act. This feat was achieved by splitting the stage into two and having the performers mirror one another while acting using words or sign language. American Sign Language teacher Amber Warren was an integral support in this process and she even invited the deaf community to view the performance. After speaking with those who attended, the performers felt like winners when they realized how much the performance had an impact on the community and that the deaf community would love to have see more of this.

Although the performance received great feedback from the local community, it did not qualify to advance to the next round. Out of the three judges, two of the judges really enjoyed the performance, but one judge didn’t understand the concept. They received a ranking of fourth out of seven schools and an alternate to bi-district. Even though the act was not awarded the ranking that the theatre had hoped for, they were humbled and felt success in the fact that they were able to move so many people in the community.

In addition to the UIL one act play contest, 2018 Tommy Tunes nominations were released March 18 and Tompkins received five nominations for Shrek the Musical. The nominations were for Best Musical Direction, Best Orchestra, Best Feature Performer for senior Nick Januhowski for the role of Pinocchio, Best Supporting Actor for Kearton for the role of Donkey and Best Leading Actress junior Caylie Howard for the role of Princess Fiona. The awards will be held on April 17 at Theatre Under the Stars. Since Howard was nominated as Best Leading Actress, she will be participated in the Lead Actress Melody as well as the opening number and since Kearton was nominated as Best Supporting Actor, he will also be in the opening number. Senior Jose Cafaro and Sydney Novosad were selected by theatre director Maggie Rodriguez to participate in the finale number.