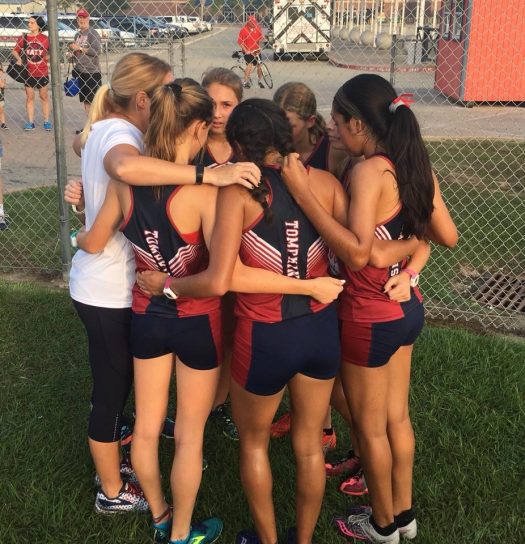 The team lines up at the line along with the other schools present at the meet. They do their final stretches to loosen up and get into the running zone because now everything matters. Their placement determined their fate. Junior Adam Smith gets into position as the official raises the gun that marks the start of the race, but this is not an ordinary race. Everything happens in slow motions as the gun fires, and the cross country team jolts forward to begin one of the most important races of their lives.

Last friday, Nov. 3, the cross country teams had their send off for the State Championships. They placed first in the District Championships and had high hopes for State which took place near Austin, Texas.

Smith is a  junior on the team who qualified for the state championships and scored a personal best of 16:14. The race was 5 km long; and the course occurred in the hilly terrain of Old Settlers Park in Round Rock, Texas. The first place team was the Woodlands, but the Falcon runners performed very well against teams that were all balanced in talent.

The girls also competed at the state tournament and have been practicing every morning since July. Sophomore Katalina Ibarra, who is also a softball player, was one of  the girls to participate, finishing in the 107th spot out of 160 runners. Overall, they placed 11th out of 16 teams. According to Ibarra, motivation and endurance are crucial to the sport, especially during a race as difficult as state where nerves were heightened.

“We were all very excited but nervous at the same time because this is the biggest meet we have ever been to… I was telling myself to run fast and keep going to try and catch the person in front of me,” said Ibarra.

Both of the cross country teams set Tompkins as a team to watch out for. As the runners witness the potential of their talents, they set higher standards for what they will accomplish next season. For their first state meet, the teams did really well considering the balanced talents among all the teams that were present.

“Our team did great at state, three out of seven runners ran their best time ever, next year we will be on the hunt for the state title,” said Smith.