The Korean Wave Meets the Wild West: NCT 127 at the Houston Rodeo 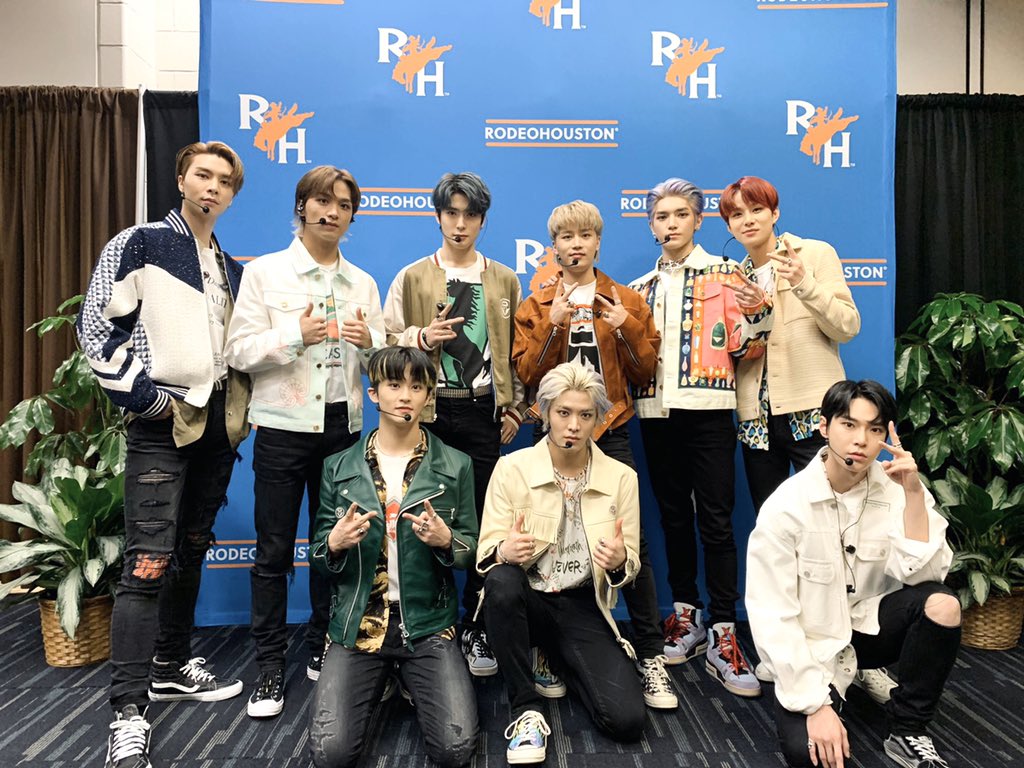 ▲
NCT at the Houston Rodeo
@NCTsmtown_127 from twitter.com

▲
NCT at the Houston Rodeo
@NCTsmtown_127 from twitter.com

Hundreds of people clad in neon green populate the massive hollowness that is the NRG Stadium in Houston on March 10. The arena is infused with the smell of fried foods, hour-long lines for merchandise and the excited chatter of the fans awaiting to see the night’s performers. The inner part of the stadium itself displays sudden sparks of neon green lighting within the vast audience sections as the people watch the livestock contests that are always held before the musical spectacular. As more and more people settle into their seats, a sudden eruption of cheers and screams takes over the venue at the mention of the performing group’s name. Houston was minutes away from welcoming its first ever Korean act on the stage of the Rodeo, NCT 127.

NCT 127 is a Korean Pop band whose name is an acronym for ‘Neo Culture Technology,’ and consists of ten members: Taeyong, Taeil, Johnny, Yuta, Doyoung, Jaehyun, WinWin, Jungwoo, Mark and Haechan. The ensemble takes pride in being one of the leaders in the current uprising of the K-pop genre, as the numbers 127 of their name actually represent the longitude of South Korea’s capital, Seoul. In other words, the group’s focus is to maintain its origins of South Korea when making music that can reach people from all over the world.

NCT 127 debuted on July 7, 2016, with the song “Firetruck” as its leading single for their first self-titled EP. The band gained both domestic and international success after their 2017 release of their EP “Cherry Bomb” on June 14, and eventually embarked on their “Neo City-The Origin” world tour on Jan. of 2019 to accompany their first full length studio album, “Regular-Irregular.”

As the concert began, most of the people in the audience turned on their lightsticks as the arena went dark. In Kpop, it is customary for each group to have one of these glowing rods designed in a way that represents the group as well as the fandom. For example, NCT 127’s lightstick is in the shape of a 3D box with the group’s logo embedded on all four sides and lights up in their official color, neon green. Lightsticks are meant to be utilized at the group’s respective concerts, as some can be connected through bluetooth in order to flash at the beats of the songs as well as change colors, and are considered to show support to the group performing as well as representation from its fans.

Despite the darkness of the stadium, the excited audience could see the nine members (as WinWin was not participating due to other projects) climb out of the truck that had parked in front of the stage, made more noticeable through the booming screams and shrieks emitted by the crowd. The group kicked off the night by performing an English version of “Cherry Bomb,” where the audience could see the names of each member flash on the titantrons around the arena. The boys emphasized their talent for putting on an exhilarating performance through their synchronized choreography, which left the impression of their dominance and control on the stage.

The band followed up the number with “Simon Says” and the English version of “Regular,” with both songs showcasing their experience as performers through their active dancing and singing. Afterwards, the members took a small break where they were each able to give their greetings and expand on their thoughts of being at the Rodeo to the audience, and then announced their next song, fan-favorite “Touch,” which was released in early 2018. During this song, it was apparent that every member of NCT 127 was taken back and touched as almost everyone in attendance belted out the Korean lyrics.

The group then performed “Replay (PM 01:27),” where they each rocked their own NCT lightstick in order to hype up the atmosphere to the addicting beat of the song. “Fire Truck” and their 2019 summer hit “Superhuman” came after, in which the boys did their signature “Superman” move that fans adore. The members took another water break and talked some more to the Houston audience. Each member showed signs of their hard work through the big screen by their visible sweat and heavy breathing. The next track they played was another fan-favorite on the “We Are Superhuman” EP, the English version of “Highway to Heaven.”. Throughout the various songs performed, the arena was energetically participating through singing and energizing it through the flickering lightsticks.

Finally, the boys gathered together for one last round of “thank yous”, and hinted at seeing everyone again soon. They concluded their set by performing their recently released single “Kick It” from their second studio album, “Neo Zone,” released on March 6, 2020. The concept behind the song was inspired by the famous martial artist and actor, Bruce Lee, which can be detected by the lyrics and agile hit points in the choreography. The Rodeo performance was the live debut of the track, and it left everyone in awe at the sheer power and gracefulness the group left on the stage.

K-Pop, however, is no stranger to leaving people in such a state. The Korean music industry is noted for its vast differences to its western counterpart, and NCT 127 embodies those differences with every album and video they release. Their music videos, much like every K-Pop video, are usually of much higher production than western videos, and most show an emphasis on the artist’s visuals, outfits and choreography. Dance is a highly important aspect of K-Pop, and NCT 127 has a choreographed dance for every single they put out. Furthermore, NCT 127’s members each have their own appointed personalities and roles, allowing the group to have their own fanbase, lightstick, showcases and signing events.

However, not many people have welcomed this genre of music outside of South Korea. In fact, the introduction of NCT 127 to the United States media and public has been met with some difficulties, mainly because of the language barrier, as many cannot seem to understand why anyone would listen to music that they cannot understand. Additionally, like other Korean artists or “idols” as they are called in South Korea, the members rely a lot on outside appearance, where the beauty standards are different than those in the west. Both men and women in the Korean music scene wear makeup in a style that vividly stands out, and many idols are subjugated to extreme diets and practice in vocals, dance or rap in order to “satisfy” the public. However, NCT 127 has shown that it is possible for people to be able to admire and cherish the differences between two cultures, and instead of focusing on the negatives, to focus on the positives. The group brings people together from all over the globe in ways unimaginable, and that is something that should be celebrated.

It is why, in a bittersweet way, it was good for NCT 127 to make its K-Pop debut at the Rodeo on its very last night due to the negative situation at hand regarding the pandemic of COVID-19. While many fans were excited for the concert, there was a lot of precaution noticeable at the venue. Many people wore face masks, and I myself continuously cleaned my hands with hand sanitizer and wipes. Unfortunately, the Houston Rodeo as a whole was cancelled the next day on Wednesday, March 11, in order to avoid the possibilities of more people obtaining the virus, leaving many people upset over the concerts and events they were looking forward to attending. However as the stunning conclusion to the performances,  NCT 127 showcased that K-Pop is not a genre to look past on, but to look forward to, as the nine members truly brought light to the Houston Rodeo during this time of uncertainty.