McVey Stated “Coach of The Week” 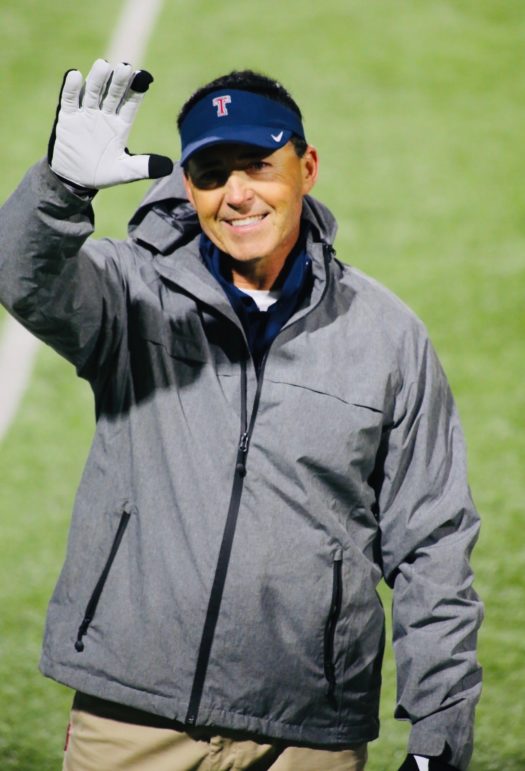 One of the key parts of each program is having a coach who is trustworthy and intelligent, coaches are an important factor into the team’s overall success and McVey portrays all of these qualities successfully. Since 2017, Todd McVey has been in charge of OTHS athletics and football. Ever since McVey joined the staff, the football team had been reaching new heights and finally began to gain traction.

“It means that we have a really good staff, and players that buy in to what into what we’re doing, it’s not just me getting an award, it’s a staff award and I’m blessed to work with men who care about kids and it’s nice that the school gets recognition for that.” McVey said.

Before coaching Tompkins, McVey served as Assistant Athletic Director for Katy ISD, Head Coach and Athletic Coordinator at McKinney HS and Killeen Harker Heights. For most of McVey’s life, he has had a passion for football, so McVey decided to pursue a future career in the sport.

“I couldn’t play pro football, so I did the second best thing that I love to do, coaching, I wanted to be a quarterback in the NFL, it was my dream, but I wasn’t meeting the requirements. Despite that, it’s right where the big guy upstairs wants me to be and I really enjoy what I do.”

High School is a stepping stone for a young person’s life and one of the many things that students face is adolescence and maturity. Luckily, students are open to new opportunities and one of the more popular options is to join an athletic program. The program a student joins can help them expand their horizons and de-stress into doing something that they enjoy.

“The relationships you build with the coaches and players, you hope you’re making a difference in their lives, maybe not just now, but 10 years later. The wins and losses will always be there but being able to help young people see something more than they can see, that’s when it’s rewarding.” said McVey.

With the regular season coming to a close, tension is high now that the players are faced by harder teams in playoff games that determine what position the team places. Nervous energy can break players and impact how the game unfolds, however, McVey makes sure to keep his players in check.

“There’s a prize at the end for everybody, there’s only a few teams that go undefeated at the end of the season, we have a mentality here of taking everything one day at a time, one play at a time, we don’t focus on the future. We’re going to focus on our controllables, which is right now and the players believe that when they see us focus on the present, we reach success and success breeds success.” said McVey.