Fighting Her Way Through Senior Year- A Student Boxer 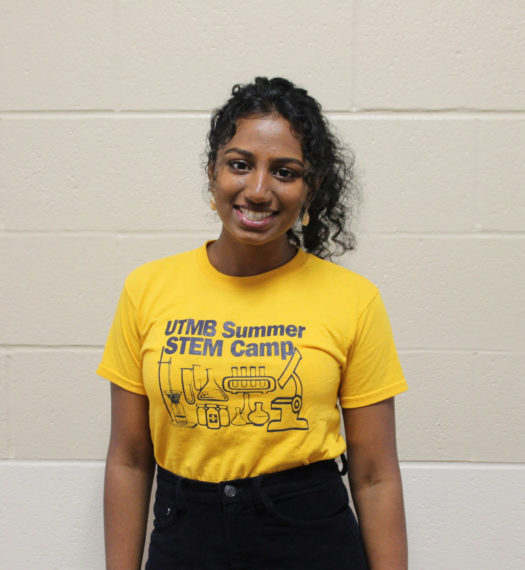 It is a typical Tuesday morning for senior Rufina Michael. At 4:00 in the morning, her alarm rings, and she, like any teenager, reluctantly gets up. Between the stress of homework and AP courses, she did not get much sleep, and where most of her peers would still be sleeping, she is beginning her training. She puts on her running clothes, and begins her morning run, making a mile loop around her neighborhood before heading inside to cool off. However, shortly after, she is back at it again. This time, hitting the bags.

After her morning training, still full of energy, Michael heads to school. Her day of rigorous courses at both Tompkins High School and Miller Career Center fly by, and before she knows it, it is time for her afternoon training.  She once again challenges her body to its full extent and jogs, practices footwork and technique, and spars with her partner. ‘Good job today Michael’ says her coach. Wanting to keep going but realizing she still has homework waiting, she heads home.

“I really got into boxing because of my aunt,” said Michael. “She was a street fighter, and I admired her for that. She didn’t want me to go into street fighting because it was dangerous, and I really wanted to fight, so she led me to boxing.”

Ever since she was a kid, it has always been challenging for Michael to sit still. She needed something to satisfy her high energy level. So, at a very young age, boxing became her passion, and she continues to fight, managing her time between school and the sport so that she can do both.

“I spend a lot of my time boxing. At least a fourth of my time a week is spent on the sport. I wake up, and try to get a run in, then from 4:30 to 5:30 I practice. In the afternoon, I practice for about two hours, and then again on the weekend when I have the chance,” said Michael.

Other than boxing, her week usually consists of going to school, spending quality time with her family, and doing homework. When she has the downtime, Michael is still seeking high energy sports, and thrives because of her extreme energy levels.

“I am a serious adrenaline junkie, and am always doing something active. I love extreme sports like paintballing. I mean I like reading and such, but I am not the type to sit at home and do nothing. I don’t allow myself to get bored,” she said.

She is always eager to challenge herself and her ability to fight. With this, she allows herself to stay open to learning new things, and to build her strength. However, testing her power in the ring has caused her to get hurt.

“I am a very stubborn person,” she said. “There was a time when I thought I knew everything, and I let my guard down. In one round, I bruised several ribs, got a concussion and my nose broken.”

The brutality of the sport, and Michael’s stubbornness do not always combine well. She admits that there were times where she has gotten tired and wanted to quit. However, her love of boxing, and ability to stay grounded when times get hard has led to her remaining as a competitor.

“I am tired every single day. It is a brutal sport, and getting tired and letting your guard down can be dangerous. But even in that 12th round, or finals you have to keep going and put your hands up to defend yourself,” she said. “My love for the sport, and competitiveness keeps me going. There are times where I get so tired and want to quit mid round. But I just tell myself one more minute, and when I keep going, the satisfaction I have in myself after makes me stronger.”

As an experienced boxer who has been part of the sport for most of her life, Michael has found her way to keep going. She sees people who come into the sport quite frequently who quit because they aren’t strong enough to keep pushing themselves.

“My words of wisdom for people joining are that you’ve got to genuinely love this sport, and have something that is driving you. You can’t join or get into it if you have this preconceived idea of what it is going to be like. Some of the best boxers that I know have something that is pushing them. But people that want to box because they think it will make them look cool usually fail.” she said. “Just stay strong and keep going. That is the key to success.”