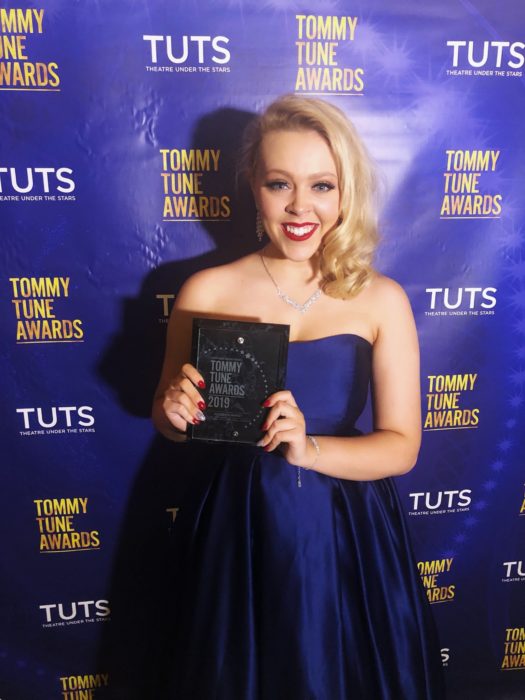 As the audience falls silent, a curtain opens and a fulgent light arises dramatically flashing around the theatre. Music begins to echo around the room electrifying the audience as the actors rush onto the stage and begin the show. An optimistic rush of adrenaline rushes down the actor’s spine as they begin their parts.

After years of hard work, 12 plays and a four year participation in theatre, senior Addison Hurst has recently been awarded for her outstanding effort in acting. She received a $3,000 scholarship from Tommy Tune Awards, in which similarly relates to the Tony Tune Awards (Broadway shows) but specifically for high schools near Houston. Hurst hopes to pursue her childhood dream of being an actress, after majoring in theatre at Texas Christian University.

“My mom used to tell me this story that was whenever I was maybe 5 or 6, we went into a Starbucks and I told my mom ‘Introduce me’  and she said ‘what?’ and I said ‘introduce me’ so she said ‘Introducing Addison Hurst’  and I sang the entire Starbucks a song. I was always a very performing kid,” said Addison Hurst.

As a child, Hurst was confident and outgoing which helped incline her to test her abilities. Hurst’s mother participated in theatre during high school hoping her skills would pass down her family. Luckily, Hurst grasped onto her mother’s appreciation for theatre. Growing up, Hurst and her mother performed at shows their church hosted.

“Just to dip my toe into those things, and to be a well-rounded person so I can know all those experiences. I just thought that was so interesting,” said Hurst.

Hurst explains the reason she got involved in the theatre community, doing and expressing what she loves. Playing the role of a character in theatre typically involves training and an ability for one to come out of their shell and be a different person than who they are. With acting comes experience, lessons, and perspective.