Monette Behind The Mission for Conservative Club 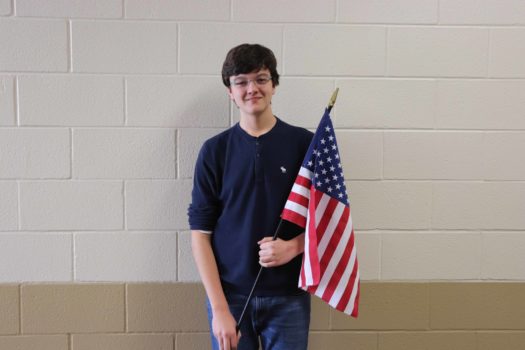 It is a typical Thursday afternoon. The dismissal bell rings at 2:35, and like ants, kids begin scattering out every exit to head home. However, sophomore Tomas Monette stays behind and heads to room 1612. There, he finds a room full of kids who are talking amongst each other, smiling and having fun. “Hey Monette,” one boy shouts. It makes him happy that his creation of one small club could bring a sense of belonging to so many people. “The topic for today’s meeting is the Special Counsel Investigation,” said Monette. He begins to give a little bit of background about the investigation and then the procedure in which members will be allowed to discuss. He turns the floor over to a sophomore boy who gives his view on the topic. Once he is finished, another begins. After about 45 minutes of discussion, the club is done for the day.

“I met Tomas during the first semester of my freshman year,” said sophomore Samuel Berry. “We have been friends ever since.”

Monette created the Conservative Club in Dec. 2017. At the time, he was a freshman. The club started off with only three members and quickly grew, now having anywhere from 16 to 20 members each meeting.

Example topics include the border crisis, the recent government shutdown, the war on drugs and First Amendment issues. Members express their opinions on certain issues during their designated time to speak during the meeting. One of the rules of the club is to treat others with respect and to not talk or interrupt an individual when they are speaking.

“I knew people had conservative viewpoints, but there was not a place to express them,” he said. “I wanted to create a club where people could come together and feel comfortable expressing their political views.”

The club typically meets every Thursday in AP Government teacher James Stone’s room where they discuss different issues or topics. The meetings generally run 30-45 minutes depending on how members respond to discussion. While now they have a place in Stone’s room to meet, things did not always start out that way.

“It is hard getting membership and putting your name out there,” said Monette. “People tend to judge or have an opinion about the club before actually attending a meeting.”

While people are entitled to their own opinions, Monette wishes that other students would give the club a chance and attend a meeting before expressing any sort of resentment towards the club.

“Tomas is a good leader of the Conservative Club and represents the core values of the club. He is honest, has a lot of integrity, and expresses conservative views,” said Berry.

As far as where the future lies for Monette and the Conservative Club, they look forward to continue meeting every Thursday, having more public debates and even getting involved in some volunteer work. Membership has grown in the past year, and the club is becoming more known around the school.

“The future for the Conservative Club looks great,” said Monette. “Things can only go up from here.”