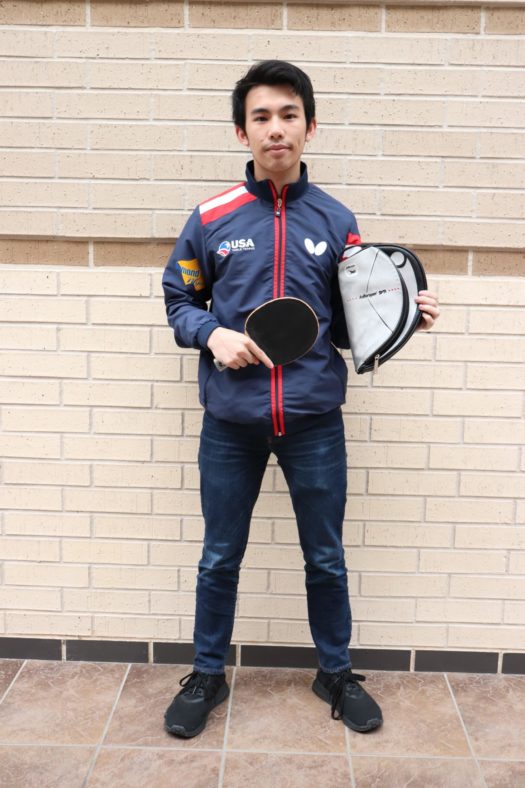 The crowd is silent as the two boys glared each other down from opposite ends of the table. Senior Michael Minh Tran patiently awaits for his opponents serve. Sweat was drizzling from his forehead, while is arm ached as the scoreboard revealed that this was a particularly close game. The next point determines his fate in the tournament, for Tran and his opponent were the final people remaining and both had a sheer determination to win. Tran’s opponent serves. The ball races back and forth repeatedly, almost appearing as if it gets faster with ever hit. Finally, Tran’s opponent smacks the net and the crowd cheers. He has come out victorious.

“I started playing table tennis when I was 4-years old when I got a paddle and a ball as my birthday gift,” said Tran. “I would play with my neighbor and my father on a little coffee table because I was too short.”

Tran began officially training to be an ultimate table tennis player when he was 6-years old. The sport quickly developed into a passion that he would pursue for years to come. After numerous years of training, he officially  after winning three gold medals at the AAU Junior Olympics.

Currently, Tran is ranked as number three in the world. While getting to complete nationally and internationally for TeamUSA, Tran spends majority of his time practicing to maintain his ranking and to prepare for competitive tournament environment.

“Before any big competitions consists of a lot of table tennis training, personal training, and stretching/ foam rolling,” said Tran. “Typically before any ITTF competition, League matches or Worlds I will train 6-7 hours a day, so around 44 hours a week.”

Tournaments typically are eight days long as each event takes two days to complete. The events include singles, doubles, mixed doubles and teams. Each event usually begins with a round robin and winners of those advance into an elimination bracket. However, each tournament has a set of rules that may vary depending on the tournament.

“The main rules of table tennis are that you play to 11 points, but must win by two,” said Tran. “Each person gets two serves each. However, if it gets to deuce (score is 10-10 or above) then each person gets one serve. If the serve hits the net then it’s a let and yields a redo. If you get to 11 points or win or win a deuce than you win the set. The winner of the match either wins a best three sets out of five or four sets out of seven. Four out of seven is normal format for international and world championships.”

Tran works vigorously to perfect his skill and keep himself in the top rankings. With hard work and effort placed into the sport he adores, he has accomplished so much and is continuing to travel and compete. The sport that was introduced to him as a 6-month old infant by his father has grown into a passion. Tran will be leaving on Dec. 14 for Orlando to compete in another large tournament and is excited for the future that he has playing table tennis.