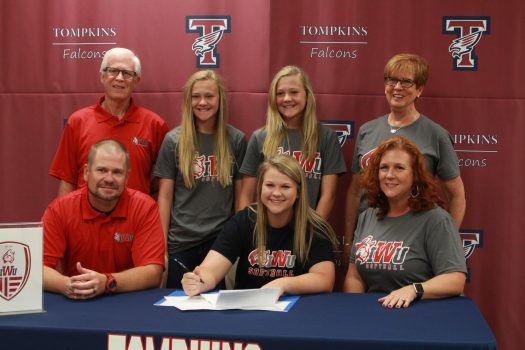 As Tompkins’ fall semester comes to a close, spring semester dawns on the students anxious to see what this school year will amount to. For some, it may include receiving a letter grade higher than they expected. For others, it may be the acceptance into National Honors Society. For the athletes, especially senior athletes wishing to continue their sport at a collegiate level, it may be getting scouted by a university.

Every year, Tompkins exhibits a large number of students who have been scouted by universities. The 2017-2018 school year has proved bring the largest scouted athletes to the table. This is both because of the increasing number of students and the years of practice backing up the graduating athletes.

“When I started receiving offers from colleges, the amount of work I put into the sport made the offers feel deserved. I knew I had worked hard to deserve this,” said senior Jacob Won.

Won is on the varsity swimming team, and is expecting to study at Texas A&M in the fall. He began swimming at the age of 6, and now Won has become one of the top swimmers of the school. As one of the lead examples of the senior class concerning swimming times, Won has also taken it within himself to be more than a number on a scoreboard.

“I think my biggest contribution to the team is not speed, but leadership and encouragement,” said Won. “I like to hype up my teammates, encourage them to do better and have fun with the sport.”

Around 56-percent of athletes scouted by universities are offered financial aid for post-secondary education, if they are in the NCAA Division II. However, it is around 75 percent student athletes in total who are offered scholarships. This can be anxiety-inducing for the already stressed students that are handling academic, athletic and social lives.

“Having scouts be at your games, knowing they’re watching you can be really nerve-wracking, but once you get scouted, it’s a relief knowing they were there and they were paying attention to you,” said senior Mackenzie Brown.

Brown is a varsity softball player, and has been for all four years of her high school career. The softball season is still ongoing, but Brown already has made up her mind on which college she will attend: Texas State University. Now, she can focus on defeating the opposing teams.

“Our attitude when we’re playing a game is very competitive. It’s business to us, we want to reach the top and we want to win,” said Brown.”

Throughout high school, student athletes may be given advice both from friends or from media about the effort they must put in to be scouted, which is often just enough effort to scrape by academically while they shine athletically. This is a myth that must be dispelled, for most universities now look at all traits of the athletes before coming to a decision. Student athletes have to implement their work ethic to all areas of their lives. Senior Sydney Hodge knows this well.

“Since we were put on varsity on our first year at Tompkins, we really had to mature fast in order to give guidance and set an example for the younger generation of student athletes,” said Hodge.

Hodge has been accepted into University of Houston, which she intends to attend this fall. With softball season beginning on Feb. 13, the girls are busy with preparations. Hodge prepares by putting on her uniform, and by giving her teammates the same leadership and guidance she would have wanted to have as an underclassman.

“For anyone who wants to make it to the collegiate level, you must be patient. Your time will come, but you must trust the process,” said Hodge. “You also have to work hard, not only in school, but outside of school and outside of practice.”