Kick it With Tompkins Soccer 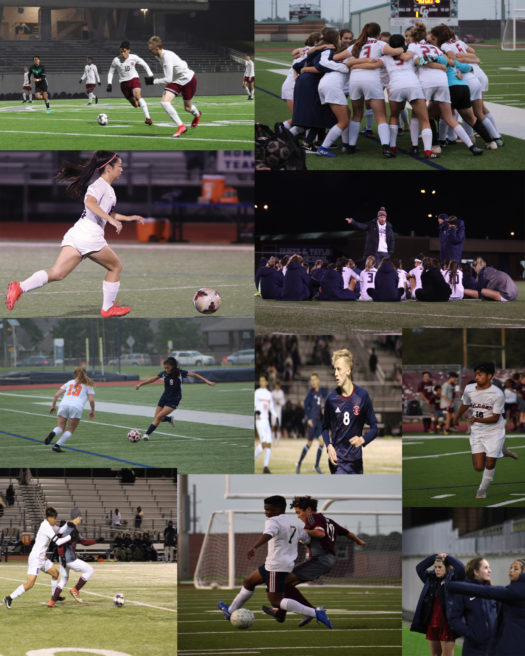 Tompkins soccer is kicking it this season. The boys and girls teams this year secured the first spot, (for the first time in the programs’ history) in district this year as they head to the playoffs. The Lady Falcons are ranked first in the nation with an undefeated record of 22-0. Junior Jules Haro has the motto of one game at a time.

“This year, our success has definitely been from our shift of focus. Our motto this year has been ‘one game at a time, and it is what has carried us through this season as we focus on the next game,” said Haro. “We can only control what happens in the game, and we are playing that moment. When it is time to focus on the next game, we move on. Now, with playoffs it is crucial to pull all our attention on one game because the next round is never guaranteed.”

The girls’ soccer team has made some adjustments in attitude this season. Now that the team chemistry is there, it has been a night and day difference in the level of play.

“The talent has always been there for us, but the difference in team chemistry from last year to this year has made a huge impact in the way we play,” said Haro.

In order to keep their top ranking, they are working on being more focused on each game. Now that it is playoffs, the next game may not be in the future if you do not win. With both teams being undefeated through district play, there is a target on the backs of all Tompkins soccer players as the team to beat.  Senior captain of boys’ soccer, Jovan Prado, has been on varsity since freshman year and been there through the process to become district champs.

“This year we have been a very patient team, but we have grown as a family. Everyone in the locker room gets along with one another, and that has helped us be successful both as individuals and as a team,” said Prado.

The boys’ soccer team has become a stronger team from being fourth in district to now being district champs. As a team, the goal was to make progress from last year and go further in playoffs than fourth round. The key to success for the boys is to take the game one goal at a time, which has lead them to be the district champs.