The Falcon Golfers Swing in the Season 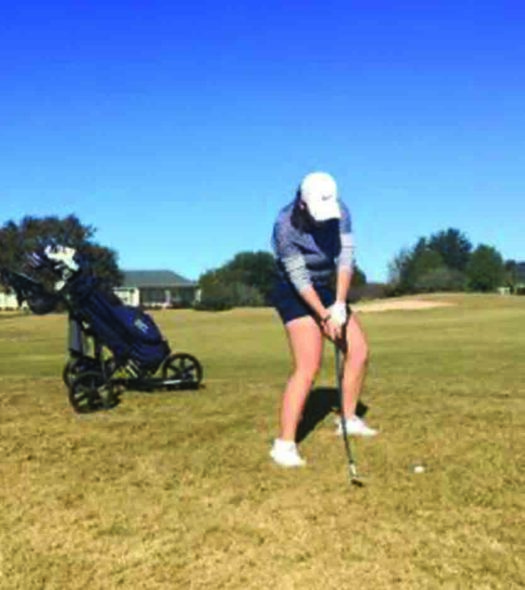 A ball is placed on a tee. A driver is swung and the ball flies through the air with a cracking sound that can only be associated with a great shot down the middle. The golfer slides their club back into their navy, crimson and white bag.

Golf is a sport that requires endurance, strength and an emphasis on mental game. The Golf program has been gaining players, experience, skill and accomplishments from when the school opened. The golfers, led by head coach Jeff Mudd, look forward to their season this year and representing the Falcons on the course.

The Tompkins golf program is at full capacity on each team. The teams are JV, which practices 1st period and varsity that practices 7th period. This year’s August tryouts had 70 people in attendance, making it the year with the most players trying out in the program’s history.

“It is a great thing to have that much interest, but unfortunately we could not take that many because we are limited by course space,” said Mudd.

The golf team’s ‘games’ are tournaments that have each of the players competing with other schools. Each school brings five players, who compete against the other schools by playing individually. When the golfers complete 18 holes, the scores are finalized and added up to make the team score. There are medals for the top three schools and top three individuals. In this aspect, golf is both a team and individual sport.

“Everybody plays their own ball and has their own scores, however you have a team of five and you take the top four scores and drop one and that comprises your team score,” said Mudd.

The golf team is promoted on social media. The program uses a lot of social media to let students know about tournaments, accomplishments and overall events. They have a twitter account, @falcongolf, a FaceBook page, and a new website. Mudd encourages students to check out the social media pages to see what is going on with the team.

“We also have all lot of good ambassadors to the program. We have a lot of interest from different staff and faculty members and students,” said Mudd.

One of these players is senior Darcy Clark who found an interest in golf from her father who is in the PGA. She grew up playing the game and still continues to play as a senior in high school. She used to compete in an outside of school league, but does not anymore. Many players compete in out of school leagues in the summer, and some compete in leagues during the school year as well.

“My favorite part of playing golf is the mental side of it, it is much more than physical endurance,” said Clark.

Golf is not as physically demanding as other sports, the game requires a lot of mental fitness; such as figuring out what way the green breaks, distance calculation and self confidence through 18 holes. Clark is a fan of the game’s originality in the way it compares to other sports. She likes that the game requires a high level of mental toughness and she loves the originality of the people. She appreciates how close and entertaining the golf team is.

“The Tompkins golf team is unique, we are like a family and there is not a moment when we are not laughing,” said Clark.

Mudd says each golfer is a hard worker and while it takes a lot of work to improve the individual and team scores, the teams are working hard to represent the school in a great way.

“We appreciate all of the support we get and we are looking forward to representing the students and staff at the district tournament next semester,” said Mudd.