Girls Gear up for Powder Puff 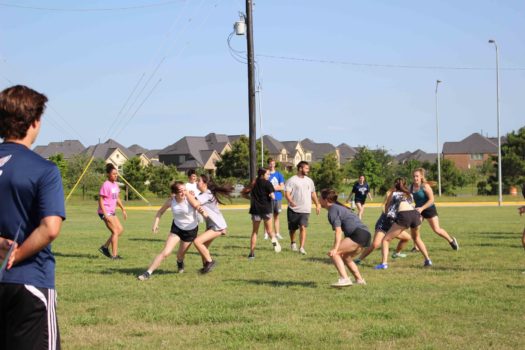 A football is thrown through the air and intercepted by a wide receiver, as they run towards the end zone. They sprint as fast as they can, avoiding other players trying to pull off their flag. On the field, twenty-two girls are sprinting and competing to regain control of the ball and beat the other team, in an annual, fierce competition. This is no ordinary flag football game, this is powder puff.

Powder Puff is a tradition of many American schools, and Tompkins is no exception. The game consists of two rival grade levels on an all girls team, coached by boys, playing an annual flag football game in front of the student body, while fundraising. This year, it took place on the football field on Wednesday, May 15.

“I am really excited to score some touchdowns and I am excited to destroy the juniors,” said Zachary Conaway.

Conaway is one of the senior team coaches this year who also hoped to beat the juniors. He was coach for the junior team last year and knows about how competitive the game can get. As a coach, Conaway was in charge of organizing and running practices, as well as putting players in certain positions for games.

“We probably practiced five times so far and we basically just run through plays and routes and just throw the ball around,” said Conaway.

Alicia Nossaman is one of the seniors who competed in the game, playing wide receiver. She played last year as a junior and learned that even though it is a fun competition mainly for raising Project Grad money, players must be competitive and aggressive. The seniors and juniors every year try their hardest to be the grade level with bragging rights for a year. However, this years game has more significance for Nossaman, as she played against her sister, who is playing on the junior team.

“My sister is playing Powder Puff as a junior so I am most excited to win and beat her,” said Nossaman.

Although the rain has prevented many team practices from occurring, the seniors and juniors competed in a fierce game, with the juniors claiming victory.

“I want all Tompkins students to know that Powder Puff is so much fun. No matter if you are good at football or not, it’s such a fun experience. I recommend that anyone who can, should be apart of it next year,” said Nossaman.