Dolotina Rises to the Top of the Tompkins 2019 Class 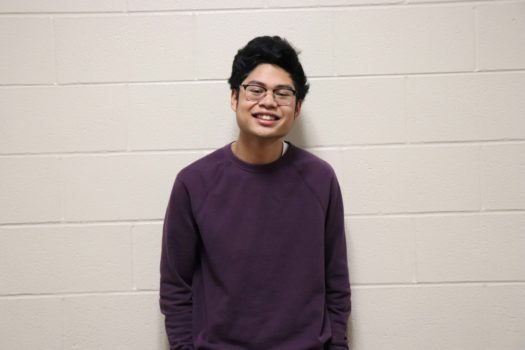 Senior Ivan Dolatina stands center-stage amongst a cheering crowd. He has just been chosen for the highest award that can be given to any student at Tompkins, the Falcon Award. He is one of two students to win such an award, one boy and one girl, and the process is determined by every teacher voting on the most deserving boy in the 2019 Class. Dolatina stands and glows from a mixture of excitement and euphoria as he is flanked by Principal Mark Grisdale and Tompkins’ namesake, Obra D. Tompkins. Dolatina allows himself to bask in the light of the stage and to enjoy the capstone moment of his high school experience.

“The one award that resonated with me the most was the ‘Biggest Heart’ award. We can all agree that high school is a daunting place. We are all trying to figure out who we are and establish an identity for ourselves. There are so many stressors in our lives, and you never know what someone else might be going through because of stress. That’s why the way we treat each other here at Tompkins is so important. You might not think that your attitude has any effect on others, but it really does,” says Dolatina.

Dolatina was the winner of Tompkins’s highest award, and he also won three class favorite awards, including “Biggest Heart”, “Mr. OTHS” and “Most Talented in a Fine Arts”. Dolatina is an accomplished four-year member of the Tompkins Band and even appeared on the local news station along with the rest of the Tompkins Band for a live performance.

“Joining the band program was definitely one of the best decisions I could have made coming into high school. Band has provided me a safe and welcoming environment that I was able to call my second home. I have met some of my closest friends through this program, and I cannot express how thankful I am to have found people who I know will always support me, no matter what I embark on,” said Dolatina.

Dolatina has demonstrated throughout his high school career how well rounded as a student he truly is. For instance, Dolatina was involved with various musical ensembles at Tompkins including: Symphony Orchestra, Wind Ensemble, and Jazz band. He also led and conducted the Tompkins Clarinet Choir, alongside two of my peers. In addition to his various ventures with the Tompkins Arts program, he is the president and founder of the Filipino Club, which was founded in order to bring together people of all backgrounds to learn more about the Filipino culture by sharing Filipino dishes, as well as discussing different topics regarding the Philippines. He has also been a member of Mu Alpha Theta, Science National Honor Society, Student Council, and National Honor Society.

“Understanding that it is okay to fail is something that has propelled me through high school. I have learned that in high school, failure is inevitable. Something that separated me from others was how I responded to failure. I could have allowed it to weigh down on my shoulders. I could have continued to talk down on myself until I had no self confidence left. Instead, I perceived failure as an opportunity to grow. I analyzed my mistakes, learned from them, and utilized those experience of failure in order to keep on moving forward,” said Dolatina.