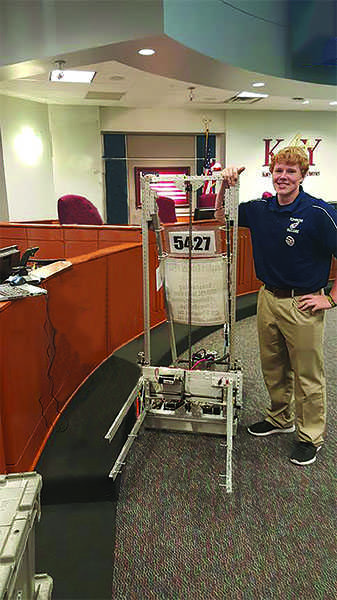 The young engineers beam smiles of pure glee and joy as they watch their latest work of art and science soar through competition. After months of arduous tasks and challenges, brain-splitting puzzles and general mechanical engineering and web design, the members of the Robotics Club admire their brand-new, fully functioning, hand-made machine.

“I joined Robotics so I could get a better understanding of electrical and mechanical engineering,” said sophomore Roman Renazco. “It eventually turned into so much companionship and so much fun.”

The Robotics Club team members can expect to deal with situations in the mechanical and electrical engineering fields; after all, the actual machine is designed and built by them. Members of the build team meet frequently throughout the ‘building season’ — the time period in which the actual robot is being put together. With financial support from companies such as British Petroleum (BP) and Oceaneering International, the Robotics team has full-access to all of the materials they need in order to build the perfect robot.

“Outside companies such as BP and Oceaneering sponsor us,” said Robotics club founder and president senior Conor Devlin. “The main competition we partake in has a $5,000 entry fee, so we usually get a budget of about $30,000 to work with each year.”

On average, the build team spends about three to four hours after school and during weekends building the robot. There are several requirements for the machine — how tall it can be, how wide, what it must look like and what it must do are all factors that contribute to the design. The Robotics Club does not have any concrete positions set; however, the club is split into teams such as web design, robotic design and building.

To decide on the design of the robot, the team usually votes on several options. Building season begins in November and concludes in March — throughout the period, the team can find itself spending hours upon hours after school and during the weekends piecing the machine together.

“We’ll come up with our own personal design that we all want and then run the programs that we use to build the robot,” Devlin said. “Once that’s done, we go ahead and start building the actual robot.”

Despite the stress of building a fully-functioning machine when under the pressure of a time crunch, the members of the Robotics team can say that they enjoy what they do. Robotics has helped several members figure out what they would like to do when they go to college — what they want to study and what they desire to major in.

“I know that what I want to do is mechanical engineering,” Devlin said. “Whether I go to Texas A&M or West Point, I know that I’ll be studying that.”

The Nestline • Copyright 2022 • FLEX WordPress Theme by SNO • Log in