Donate Bundles of Warmth in Socktober 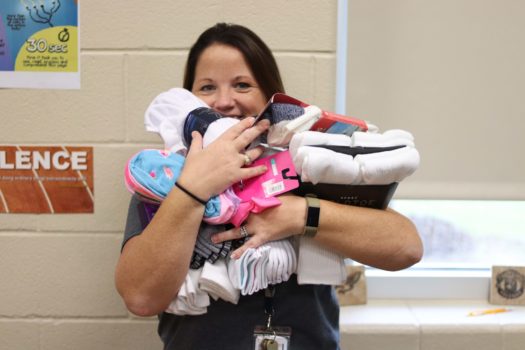 ▲
Amanda Sandlin shows off the socks that have been collected.
Nick O'Brien

▲
Amanda Sandlin shows off the socks that have been collected.
Nick O'Brien

Thousands of socks are being counted and organized on a classroom floor as they are prepared to be shipped to different places. Many students gather in a room to contribute to the large task that is sorting a massive pile of socks. It is Socktober, the month associated with a national campaign in order to collect socks for those in need. Psychology teacher and Psych Club advisor, Amanda Sandlin, started this at Tompkins four years ago and hopes that this month’s count will break the record of last year.

“Everyone needs socks. Helping others can help you feel good and help put a lot of things in perspective. This is a great way to get connected to the Katy community,” said Sandlin.

Socktober, as indicative of the name, begins on Oct. 1 and ends on Oct. 31. Since the charity has been tied to Take Flight, students and teachers now bring pairs of socks they want to donate to their third period class. Then after it ends, those socks are given to many different charities in the area that are in need.

“We have donated to Star of Hope and Clothed by Faith in the past. As our numbers get bigger, I would love to branch out to other charities in need of socks,” said Sandlin.

As the advisor for the Psych Club, Sandlin started this project as a way to influence club members and students to aid the community. She discovered the idea from the viral Kid President videos and decided to implement it at Tompkins. Since the Psych Club sponsors this event, the members are responsible for advertising, creating flyers, announcements and advocating to their Take Flight classes. They also are in charge of organizing these items before they are donated.

“Volunteering and giving back are really important values to me,” said Sandlin. “I have tried to build our Psych Club as a model for being intrinsically motivated to do the right thing. It is important to be a nice human.”

As the fourth year of the service project, Sandlin and the Psych Club’s projected goal is 4,000 pairs of socks. This goal is not far fetched as every year the sock count has increased. Starting from 40 socks, to 60, and to the grand total of 2,248 pairs last year, it seems that this goal is attainable. Sandlin credits the connection to Take Flight for the rapid increase in socks, as the activity is mentioned in the first couple of lessons.

Since Socktober only lasts one month, Sandlin believes that there are other ways to get involved with charities like this. Since winter is approaching, many shelters are low on socks which are needed to keep people warm. Also, items such as underwear and socks are donated less than clothes, because they need to be donated new. Giving even one pair of socks could really help someone.

“I think we often take these things for granted. I had never really considered that shelters would be in a higher need for them until I started researching it,” said Sandlin.