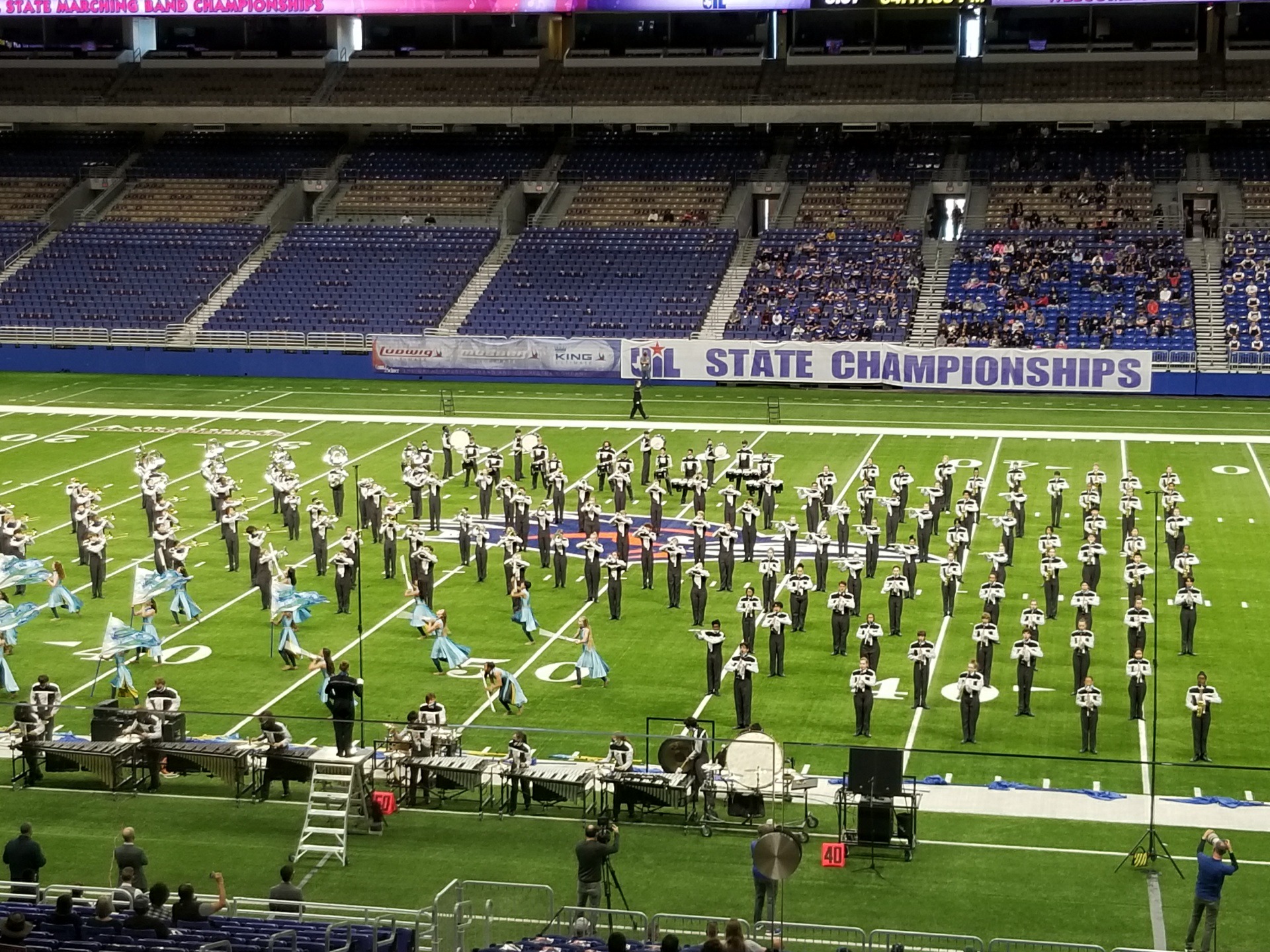 Ending the previous silence, cheers filled the large stadium as the group on the field found their way to their beginning placements. Some were pushing large equipment, rushing in order to make it to their spot on time, and some were making their way slowly but surely towards their spot. Despite the two different exteriors on the field, each person was going over the show in their head, thinking about every little movement they needed to hit to make it the greatest performance in their life. With the hand raise of the drum major, that performance began.

“I found out we were heading to state on the bus ride back from our area performance,” said senior Alyssa Smith. “I couldn’t breathe of excitement because this was the event that we had worked toward all season long.”

The band began working on their show titled, “The Remix,” in September of 2020. Due to the pandemic, there were many changes in how they were allowed to practice and perform the show. In the show, much of the drill kept students six feet apart from one another, allowing students to safely play with their masks down.

“I love the band found a way to make a marching season work despite the rules and regulations that were set in place due to the pandemic,” said Smith. “ The band show was revised, but not downgraded and the band schedule was shortened, but not taken away altogether.”

On top of the adjustments  inside of the band, there were changes that affected many of the bands in the area who were hoping to attend the marching contests. Some of these included pushing back the season and minimizing the amount of hours allowed to practice over the week. This change, along with  the changes of COVID-19, has many bands in the state taking a step back from competing in the upcoming season, making Tompkins one of the few bands competing.

“My favorite part of making state was seeing the reaction of all the band members when Mr. Singletary announced that we had qualified for state,” said Smith. “The excitement filled the room at that point and the rehearsals after that were full of hype because we knew that we were about to go perform in the AlamoDome.”

The state competition took place on Dec. 15 in San Antonio’s AlamoDome, where the Tompkins band competed against the top 20 bands from all over the state. There, they were judged and ranked against the others, including Tompkins’ neighbors, Seven Lakes. After performing at state, the band placed 12th place out of 20 bands, making Tompkins the top 12th band in the state, the highest ranking for Tompkins High School’s band.

“It truly is an honor to be able to perform at the highest achieving event of marching band with a group that I have called family for four years,” said Smith. “Considering the circumstances that we have been under this season, this was one heck of a way to end my high school marching career.”

For many seniors, this is the last performance they will get before they head off to college, making this year an important year- not only to the seniors, but the people they have spent years with in high school. For many, making state was a great way to help show the hard work and dedication they had put in the short time they had in the Tompkins band.

“I was so excited and proud to go to state because I knew that this was my last chance to perform in the Alamo dome, which is always a memory that I will never forget,” said Smith.