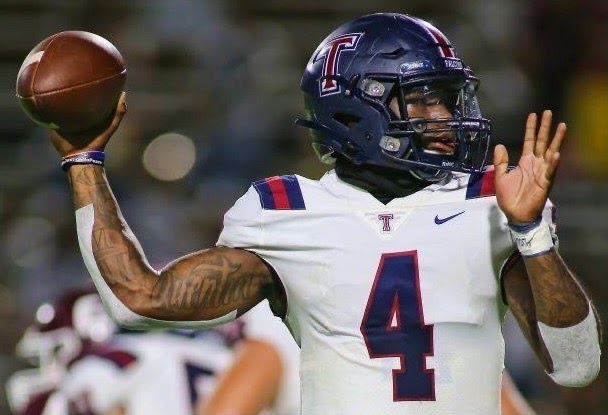 Aluminum bleachers, brimming with devoted onlookers, towered above the stadium’s evergreen field. A cluster of drum majors bellowed the school’s alma mater as an assembly of dancers swayed to the beat. On the sidelines football players were  gathered together, some engrossed with the last minute task of memorizing their plays while others were preoccupied by more mundane matters. At the very front of the huddle, with his head held high, stood senior Jalen Milroe. He narrowed his eyes, surveying the area, before lowering himself into proper running form. Then, along with his fellow teammates, Milroe raced onto the field, his arrival greeted by an onslaught of cheering fans.

“As a member of the Tompkins’ football team, I have a responsibility to be an example of great leadership. Every year, I train harder in an attempt to surpass the effort I placed into the team the previous season. I mentor up and coming sophomores and dedicate my afternoons to reviewing film,” said Milroe.

Milroe’s lifelong passion and commitment to football emerged at the early age of 4 when his parents acknowledged his immense athletic potential and his unwavering work ethic.

Under the guidance of his father, Milroe rehearsed countless intermediate passing drills and steadily developed his footwork. Weeks of tireless practices greatly improved his agility and, as a sixth grader, he received first place in the FBC National Championship Tournament.

“Whenever I train for an upcoming season, I remember to hydrate and I always try to incorporate some form of protein or vegetables in my diet,” said Milroe.

Milroe’s penchant for the sport continued throughout middle school, where he expressed interest in pursuing an offensive position. During his first year of high school, he joined the Freshman A team as the designated quarterback and was swiftly promoted to varsity the following season. As a sophomore, he heavily contributed to Tompkins’ newfound winning streak by scoring a total of 20 touchdowns and sprinting over 2,000 yards in the span of a single season. Since then, Milroe has received numerous awards for his achievements in football and, most recently, earned the honorary title of All American.

“To be considered one of the best players in the country is extremely humbling. Becoming an All American was always a goal to work towards and I’m proud to achieve it,” said Milroe.

As Milroe’s success as a quarterback  increased, so did his selection in colleges. Universities with renowned athletic programs, such as the University of Arkansas and Florida, offered him starting positions on the team while one member of the Big Ten Conference, Oregon, even offered him a scholarship. Milroe originally committed to the University of Texas during his sophomore year, citing the school’s successful football program as the primary reason for his decision. However, only two years later, he uncommitted to the college and announced his decision to attend the University of Alabama. Milroe had visited the campus several times and developed a fondness for the school’s inviting atmosphere. While meeting with the university’s athletic department, the coaching staff thoroughly reviewed Milroe’s past victories and offered new techniques to further develop his offensive abilities. With their aid, Milroe could achieve his lifelong goal of winning an SEC championship game and prepare himself to pursue a professional football career after college.

“I developed a good relationship with the coaching staff and the campus reminded me of home. Overall, I believe the University of Alabama is the ideal college for me,” said Milroe.