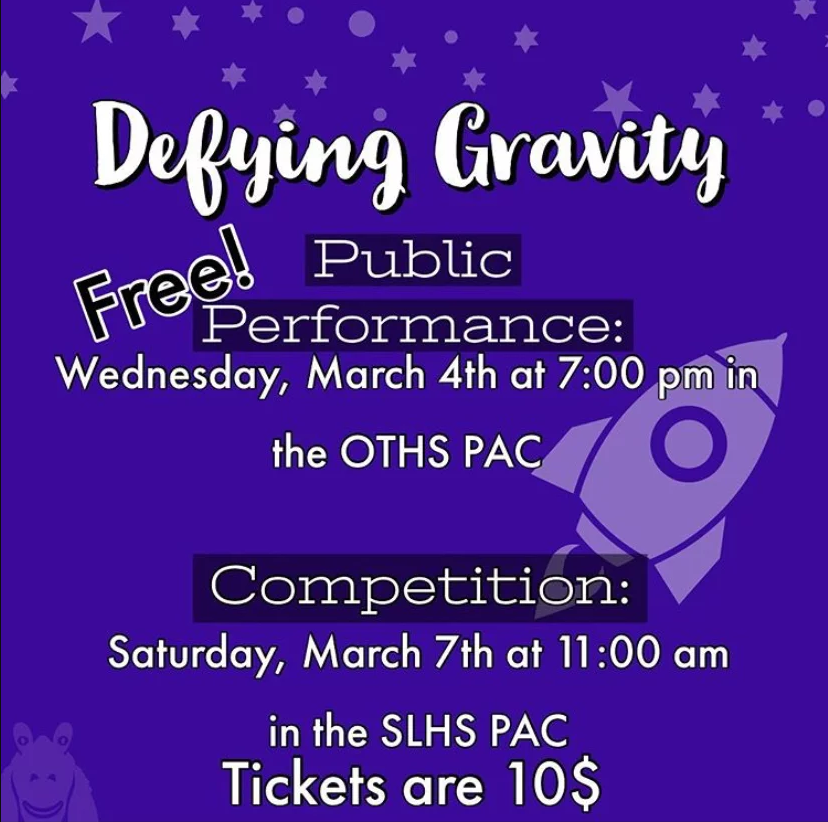 In the center of the ebony stage, a pale chair rests beside a nightstand. A radio, shrilly announcing details of this morning’s tragic accident, and a plate of untouched food are the only items on the table. The right side of the stage displays a deserted control room, schematics scattered across the floor and computers refusing to operate. The left of the stage presents a town square where thousands of people have gathered, each staring at the sky in shock. Three different preservatives, three separate places, but only one look of horror.

“Whenever I am in a scene where I need to act upset, I simply imagine myself in a similar situation to my character. Out of all my acting techniques, this one produces the most authentic emotions,” said junior Liah Carra, the lead in the UIL show.

This year, the Tompkins Theatre Company will present their production of Defying Gravity for the UIL One Act Play Competition. The play reenacts the 1986 explosion of the Space Shuttle Challenger, primarily focusing on how the tragedy affects various characters. In order to form this connection, Defying Gravity offers its audience unlimited look into the disaster by employing three separate reactions to the explosion. The majority of the play discusses Elizabeth’s, portrayed by Carra, relationship with her mother, portrayed by junior Emma Samaie, before and after the mother’s fatal accident. However, several scenes throughout the production are dedicated to those who built the Challenger and the onlookers who witnessed its explosion. The cast presented a free showing of the play on March 4 at Tompkins before completing in the UIL competition on March 7 at Seven Lakes.

“I am determined to portray my character as realistic as possible. I want to remind the audience that the mother is kind but flawed,” said Samaie.

Despite the Challenger’s explosion becoming an infamous part of American history, Defying Gravity has chosen to blur the lines between fiction and reality. Characters fully embrace the time period by perming their hair and donning colorful gowns. The dialogue is mundate and simple, reflecting typical household and workplace conversations. However, characters constantly couple realistic discussions with lyrical movements, causing many scenes to appear surreal. The protagonists also follow a strict color scheme. Carra only wears pink clothing while Samaie’s appearances are basked in blue lighting.

“Defying Gravity takes a real event and gives it an artist twist. Due to abstract nature of our movements and lines, the entire play is open to interpretation,” said Samaie.