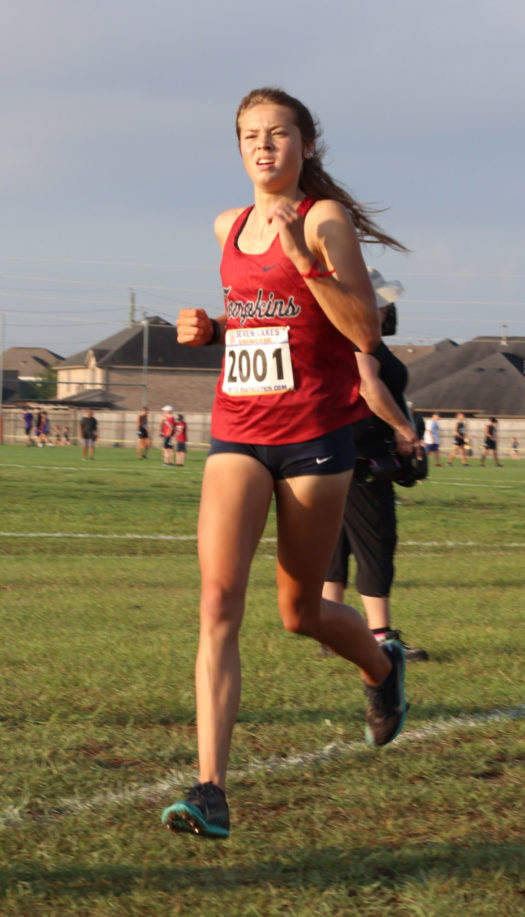 Donning nothing more than a colorful pair of running shorts and a faded top, junior Addy Stevenson crept out from the dark. She reached out and gingerly brushed the tips of her fingers against the wallpaper. Her hand collided with a piece of hard plastic and, with a tired smile, she flipped on the light switch. With the room now fully illuminated, Stevenson laid down in the center of the room. In one swift moment, she brought her chest to her knees and then quickly returned to her original position. Droplets of sweat trickled down her chin as she repeated the same motion over and over again. A heavy sigh escaped her lips as her face, once pale, slowly transitioned into a dull red. Stevenson, with her back still arched, glanced at a nearby clock. She immediately halted the workout and rose to her feet. Still in a daze, Stevenson tied her laces one last time and left for morning cross country practice.

“In order to improve my body, I need to push myself everyday and become the best in my field,” said Stevenson.

Stevenson’s daily route is unlike any other high school student’s. She wakes up at 4:30 am to complete a 45 minute workout which consists primarily of arms, abs and legs exercises. Once the workout is complete, she attends cross country practice and runs until the start of first period. During seventh period, she utilizes her status as track captain to guide her fellow teammates through difficult practices. After track practice, she stays after school and participates in high jump workouts.

“The day before a cross country meet I take an ice bath and roll out my muscles. I am also careful not to overwork,” said Stevenson.

As a child Stevenson participated in gymnastics. After 12 years of competing in local and national competitions, she decided to pursue a new passion. She joined track in seventh grade and competed in various field events. In eleventh grade, one of the track coaches witnessed her athletic talent and recommended she try cross country. Stevenson agreed to the offer and seized the opportunity to improve herself. In just one month, she climbed through the rankings and became the fastest member on the varsity team. She placed second in the 5k district competition with a time of 18 minutes and 10 seconds. The following week, Stevenson overcame her own record with a time of 18 minutes and 6 seconds. However, her greatest achievement of the season was when she placed second in the regional competition. Due to her outstanding performance, she was chosen for the Texas all state team.

“My coaches support me through all my meets. They teach me proper running form and offer advice in my time of need,” said Stevenson.

In order to remain healthy, Stevenson follows a strict diet. She regularly consumes a large amount of protein, normally in the form of protein cookies or shakes, to maintain her muscle mass. She avoids processed foods and does not eat anything with artificial coloring. The night before a meet she eats a meal consisting of french toast and water. The day of the race she drinks hydrogen water and chews caffeinated run gum.

“Every week I talk to the school nutritionist and plan out balanced meals.This way I know I am eating enough protein to build muscle strength,” said Stevenson.

Several colleges have already shown interest in Stevenson. Coaches from Rice, University of Texas and Oklahoma State have begun discussing scholarship opportunities. Last week, Baylor offered her a tour of their athletic department. During her visit, Stevenson saw the campus’ full size track and their weight room. Despite the trip, she has not committed to any college yet.

“All I want in a college is a chance to run cross country and compete in high jump,” said Stevenson.