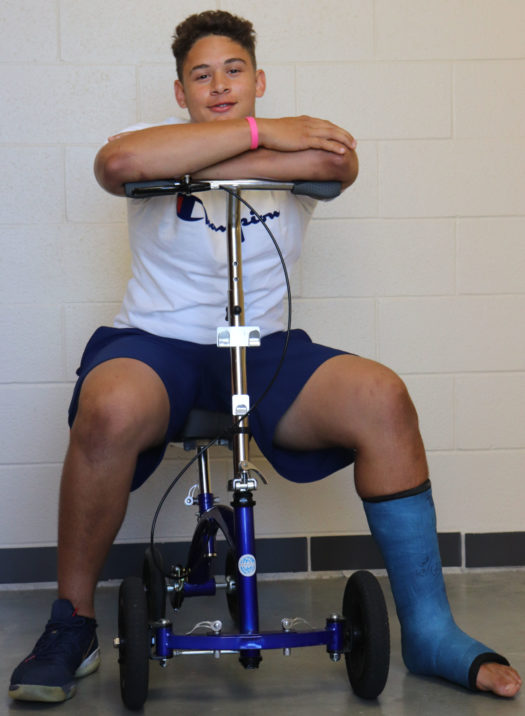 A coach’s whistle, drowned out by students’ screams, cried out into the night. The referee halted the varsity football game and prompted for the opposing teams, Katy and Tompkins, to send in new players. At his call junior Justin Bevrotte raced onto the field and quickly settled into his position of Defensive End, his cleats tearing into the turf when he did so. The play resumed and, at the sound of another whistle, a Katy player pounced towards his opponent. In a vain attempt to avoid the tackle, the Tompkins guard jumped back. His legs tangled and he tumbled towards Bevrotte, his entire body landing on top of the junior’s leg. A wave of pain washed over his ankle as the color rapidly drained from his face. A burning sensation engulfed his muscles, causing his head to pulse until his vision was blurred by red. As his eyelids snapped closed, he caught a faint glimpse of a pair of paramedics reaching towards him.

“I knew I was injured when I heard my ankle pop. It wasn’t until I couldn’t get up that I realized how much pain I was really in,” said Bevrotte.

After realizing Bevrotte could barely stand, the medics of Legacy stadium rush him to Memorial Hermann Hospital. Upon his arrival, the nurses immediately took precautions by applying multiple stitches to the injured area and wrapping his foot. After hours of examinations, the specialists discovered he had torn two ligaments and a broken fibula. The following day, doctors placed Bevrotte under anesthesia and permanently embedded a four inch, metal plate and six screws into his bone, in hopes of improving his ankle movement.

“I am not scared to return to football, however, I will be more cautious when running plays in the future,” said Bevrotte.

Despite his recent treatment, Bevrotte has already begun his two-month long recovery process. On weekends he strengthens his arms by performing doctor recommended exercises like lifting weights and swimming. He even utilizes his crutches for a quick workout and only uses a scooter when he becomes tired. Once he receives his hard cast, Bevrotte will continue to regain his stamina by beginning physical therapy with a trainer. In the meantime, he will continue to attend football practice and games, in order to support his team.

“I’m confident in our team’s ability. I’m only concerned about our starters becoming tired and no one will be there to give them a break,” said Bevrotte.