A Project for Better Journalism chapter
The Nestline
Entertainment 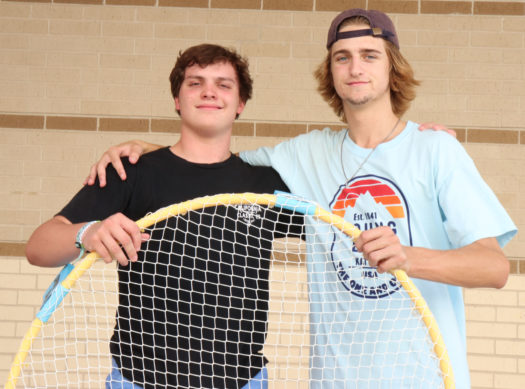 Four boys, each hunched into a defensive position, crowd around a miniature trampoline. Juniors Collin Little and Jack O’Neill share a look and step forward, a ball held firmly between O’Neill’s hands. The pair across from the boys quickly mirror their movements and, with a simple wave, motion for the game to begin. O’Neill, a smirk rapidly spreading over his face, slams the ball into the center of the trampoline netting. Meanwhile, the surrounding audience leans forward, eager to witness the other teams counterattack. The opponents scramble to return the serve, only for the rubber ball to soar right past them. As onlookers cheer, Little gingerly scoops the ball back into his arms. He returns to his teammate’s side, ready to deliver the second serve.

“The best part of spike ball is how everyone is able to come together and really get into the competitive spirit,” said Little.

The Spike Ball Club, founded by Little and O’Neill, started as an alternative for school sports. The idea simply started as a way for their friend group to enjoy some time after school together every Wednesday and Friday. However, over the course of a month, the organization gathered a large amount of attention from students throughout grade levels. Both founders have credited the rising number of members to the humorous posters they created in their sponsor’s, Erin Mitchell, art room. Little and O’Neill plan to use their new members to increase the number of spike ball teams in the club and challenge clubs from other schools throughout the school.

The game of spike ball requires one rubber ball and one portable trampoline. Teams of two stand on opposite sides of the trampoline and take turns bouncing the ball on the netting. The ball is then hit back onto the trampoline and back to the other team. Whoever causes their opponents to not hit the ball back is rewarded point. This cycle is repeated until one team reaches the agreed amount of points to win.

“My advice to anyone wanting to try spike ball is just to keep trying. Once you learn the game, it’s easy to enjoy yourself,” said O’Neill.

For further information on the club contact the Spike Ball team through their Instagram page, Oths Spike Ball.