A Project for Better Journalism chapter
The Nestline
Features 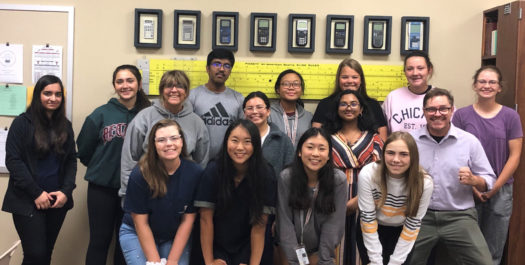 ▲
The members of Habitat for Humanity gather for a group picture

▲
The members of Habitat for Humanity gather for a group picture

“I was surprised that no one thought of starting a Habitat for Humanity club before. It’s such a well known charity, I don’t know why I didn’t think of it sooner,” said K. Choi.

In February, they filled out an interest form on Habitat for Humanity’s website and waited anxiously. A few weeks later, a Habitat for Humanity adviser emailed a response. K. Choi, the self-appointed leader of the sibling duo, saw it first. She opened it in the middle of class, too excited to pay attention to her teacher until she found out if she got in. Nervous to get in trouble with her teacher and impatient to get an answer, she only skimmed it. “After careful consideration”…..”great addition to our Habitat for Humanity family”….”can’t wait for you to start volunteering”…she was officially the founder of a Tompkins chapter of Habitat for Humanity! She put her phone away and tried to pay attention to her teacher, but she couldn’t stop smiling. She couldn’t wait to tell her sister the news.

“We were immediately ready to go. Like, we were ready for that first meeting, but you can’t start a club in the middle of the year. The silver lining is that it gave us a lot of time to prepare,” said A. Choi.

Habitat for Humanity’s first meeting was on September 23. After that, they chose officers. K. Choi is the president, and her co-founder A. Choi is the Vice President. Secretary Krithika Elango, Treasurer Rachel Bregnard, Historian Shaughnessy Dunn, and Ninth Grade Representative Becky Lee were chosen through a vote.

“I’m really excited to start volunteering, and I can’t wait to see how the club grows,” said A. Choi.

“Habitat for Humanity is helping people in without feeling bad for them or thinking of them as a charity case. It’s a community,” said K. Choi.