Look Behind the Stage of Eurydice 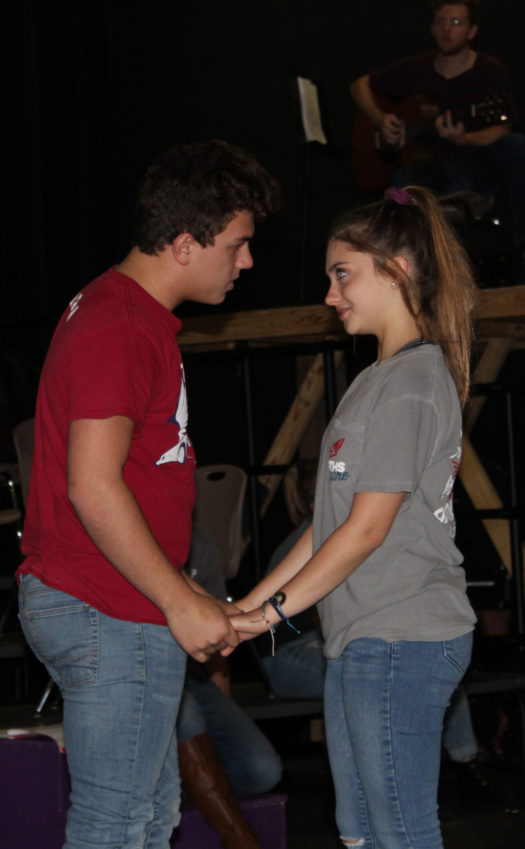 As the crowd filters into their seats, the crew prepares for the big show. Stage hands give the costumes and props to the cast and get them into position. They perform a mic check making sure the curtains are ready to open. Sophomore Hayden Frasier stands to the side and is ready for the play to begin. Fine arts teacher Mark Mcmanus  watches and gets everyone ready for the play. The crowd begins to quiet down and as they all settle down and the curtains open. The play ensues and everything goes according to plan. All the preparation the Theatre Company made, is finally paying off and the play goes off without a hitch.

“We’re putting on Eurydice this semester. It’s a tragic love story between Eurydice and her husband Orpheus,” said Frasier.

The play takes the perspective of Eurydice as she has to struggle with staying in the underworld or following her love Orpheus to the living world. The show is taking place in the black box in the Theatre hall which is the school’s first time having a production there. This play has a great cast and crew ready to put on a great show.

“All of our crews and actors are hard at work making sure that it’ll be the best it can be,” said Frasier.

As time continues the cast prepares for their next masterpiece memorizing lines and blocking so the audience can be immersed. As the crew is painting and building everything they need the directors are having to work in both fields, helping cast and crew as the deadline approaches.

“I think our students are ready for the production, we’re still two weeks out before we open but I definitely think they are ready and eager to perform,” said McManus.

The theatre students have been preparing and are excited to perform, this is a new experience for them and will come with many difficulties to follow. They have made their stage and will even have a live band there playing music along with a choir. They have been going over their lines and getting stronger as they will have to do lifts with their fellow actors.

“This particular play is different than a lot of the plays we will be doing  in it allows a lot of room for the director and the actors to make choices,” said Mcmanus

Mcmanus is more than prepared to lead his students for this play and has had years of practice and training in Theatre. He has practiced performative theatre and the technical side of it so he can assist on two fronts with the cast and crew. The tickets are for sale now for Eurydice and you can buy them for $10 online at TompkinsTheatre.com or at the door.

“Eurydice is a greek myth, I wanted to do something that is related to classical literature and the Greek culture,” McManus said.