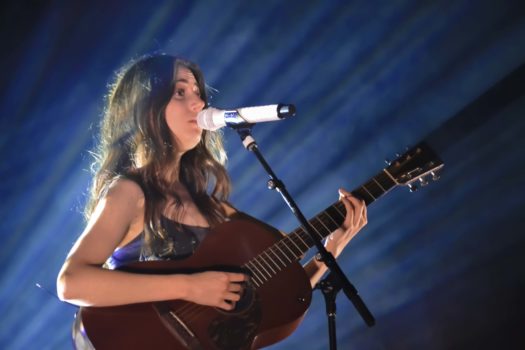 ▲
Dodie performs at the House of Blues.
Rebecca Alcozer

▲
Dodie performs at the House of Blues.
Rebecca Alcozer

In the midst of angelical lighting, Dodie emerged from the darkness to greet her enthusiastic crowd filling House of Blues Houston on Sept. 23. The diverse crowd piled near the stage in order to express their love for the artist. Dodie’s fans decorated the room with their smiles, and didn’t hesitate to express their excitement as they chanted her name.

Dodie, also known as Dorothy Miranda Clark, began her indie-pop music career through Youtube videos in 2011. Since then, the 24-year-old English singer-songwriter has raised a following of millions and pursued professionally produced music, including her latest album, “Human” (2019), which inspired her current tour. Clark is currently touring the United States with her on-stage companions Orla Gartland (vocals and guitar), and Will Harvey (vocals and guitar).

The show began with Adam Melchor, an indie-folk artist with an equally humble but confident stance before the crowd. Although much of the crowd was unfamiliar with his work, Melchor immediately connected himself with the audience, and shared intimate memories from his life, explaining the meaning to each song. Melchor also shared an unreleased song he began playing on the tour named “I choose you”.

“This song is about feeling so excited about someone that you can’t stop thinking about them, and wonder how you ever functioned before meeting them,” said Melchor.

Reaching the end of his performance, Melchor thanked the audience for coming, and mentioned how grateful he was to be performing before them.

“I feel supremely lucky to be able to play in front of you guys, and to be opening for such amazing musicians and amazing people. It’s really crazy you know? For a long time I was playing at bars, restaurants, and weddings. I was just playing to the back of people’s heads, so it’s really nice to be play at the front of your faces, so thank you guys for coming,” said Melchor as he ended his set.

Dodie began her set with, “Arms Unfolding,” the first song off her latest album.

Her scenic entrance astonished the crowd as dramatic lighting shined through her heavenly white costume. She later proceeded to rip her costume off, introducing the concept to her next song, Monster.

As the night continued, Clark showcased her bubbly personality by constantly interacting with her fans, and sharing personal stories relating to her life. The young artist wasn’t afraid to open up to the audience about her difficult moments, sharing insights about her sexuality, and family life. There were many heartfelt lyrics being shared that radiated through the crowd, revealing an intimate connection between an artist and her audience. While there were many emotional moments, there were many exhilarating moments as well. Clark presented herself fearlessly, accepting anyone who would dare to listen. Her stage presence was bright and radiated confidence.

The rest of Clark’s setlist continued to consist of unforgettable moments for her fans. Clark performed an unreleased song called “Boys Like You,” meant to be released the following Friday, Sept. 27, mentioning it was dedicated for the boys that manipulate women’s feelings. Her fans immediately reacted positively, and showed their support as they clapped along to the music.

The interesting thing about Clark is not how she sings, or what she sings… It’s how she makes the audience feel when she sings. It’s almost as if it doesn’t matter what’s playing as you watch her. She evokes emotion within her audience, regardless of music taste, or opinion, and that’s what makes her charming.