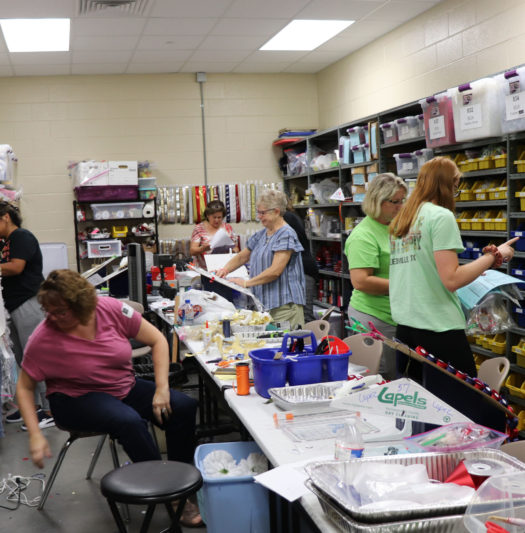 Large clanging sounds echo down the hallways as students rush down the hallway to greet their friends. People proudly show off the giant faux chrysanthemum hanging from their necks, while fellow students smile at the familiar trinkets hanging in front of them. Despite it being a long tradition, students still flock to the chance to see others mums, and show off their own.

Braids, charms and trinkets fill the hallways as students make their way through the school day, eagerly awaiting the homecoming game. Dates switch the mums they had made for one another, both exactly what they wanted. The excitement stretches over the school as more people arrive, carrying the mum specifically made for them. Many years have been put into this tradition, and it’s still going as strong as ever.

“It started a long time ago, it was a big tradition in Texas,” said Jennifer Williams, volunteer at the Tompkins Mum Factory. “I think it started as a kind of date thing, but then it morphed into a school spirit kind of thing.”

“It’s a really fun way to be excited about having something that shows your school spirit and you at the same time,” said Leah Wilson, volunteer at the Mum Factory. “It’s not just the colors of your school, it’s all of those little things that are part of defining who you are.”

Mum and garter colors are organized by what grade level the student is. Underclassmen get the school colors on their mum, while juniors get silver and seniors get gold mums. Students can also add on anything that they want onto their mums, making the mum personal to themselves.

“I think to put together a mum takes around two to three hours, but that’s with all of the mum components,” said Gayle Gonzales, a Mum Factory volunteer. “To make all the braids, points and components of the mum starts three to four months in advance.”

Because of the early homecoming this year, the Tompkins Mum Factory began making the braids, bears, and all other components in March, seven months in advance. The mums that are sold at Tompkins consist of a mum, bear, ribbon and all the trinkets that the student chooses for their mum. The Mum Factory takes the parts the student chose and puts them together on the mum or garter.

“It is a lot of digging for previous mum designs,” said Wilson. “We look into Instagram to see what is popular right now in a mum.”

The Mum Factory has many different designs that a student could incorporate into their mum or garter. A student can pick up a regular mum and call it a day, but another student could order everything on the shelves. Mums at the Falcon Mum Factory can be made specifically for what the student wants. The decoration of the mum or garter surround the choices of the student buying the mum.

All the proceeds made from the Tompkins Mum Factory go directly towards the Tompkins Falcon Band. This tradition has been in existence for many years, and has developed over those years. It has highlighted many generations of southern high schools with personality and school spirit. Each mum is a keepsake from each year of your highschool life; it holds the ability to look back and see where you were during those four years.