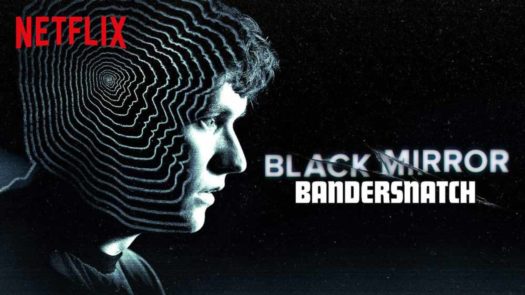 The film “Black Mirror: Bandersnatch” is an enjoyable movie with an interactive ‘choose the character’s choices’ type of addition, which makes the movie unique and a new way to get more immersed in a movie. It was directed towards ‘mature audiences’. It is in the categories of thriller, mystery, and sci-fi with twists and unexpected choices throughout the film.

The movie takes place mostly in the main character, Stefan Butler’s, house. We also go to his psychiatrist’s, Dr.Haynes, office at some times throughout the film. Lastly, Butler goes to Tunkersoft, a video game company, to sell his game. The mood of Butler’s house is tense and mysterious while the mood of Dr.Haynes office is very controlled and calm. The mood of the Tunkersoft Company is very judgmental and uneasy. The different places all have a tenseness in the way the Butler acts and how on edge he is throughout the entire film.

Butler creates a video game based off of the book Bandersnatch which has a choose your own storyline theme to it. Throughout the “Black Mirror Bandersnatch” movie, you can choose what happens and how the story progresses. Butler teams up with a video game company that partners with his video game creating idol named Colin Ritman. You can choose to go solo or join a team of creators in creating Butler’s game, and as you make other choices, there are different things affected by your choice. With each different ending that you can watch and get, there are just as many different plots for each of the endings that you can get.

Butler is a very introverted character who has grown up with video games and reading being his childhood and joy in tough times. His father, Peter Butler, is a man who smokes and looks out for Butler with his son’s best interest in mind. Ritman is Butler’s idol and a mysterious character who has created the top and best-selling games in Butler’s world. Ritman helps Butler throughout the film with his game. Dr.Haynes is a very open and kind character as she helps Butler with his struggles and stress at home. Mohan Thakur is the owner of Tunkersoft and wants to help Butler distribute his game out in stores. Thakur is very comical, but he pushes for control over situations and ideas.

The central theme of “Black Mirror Bandersnatch” is that the past can lead a way for the future. This is seen with Butler’s life in comparison to Jerome F. Davies, the writer of the book Bandersnatch, that Butler is basing his game off of. “…I thought we were on the same team” said Butler to Davies in a dream. This shows that Stefan was thinking of the creator of the book throughout the entire movie as he was creating his game. The importance of Davies comes up later in the film as Stefan’s story moves forward. The lighting and feel of the movie is very eerie and it doesn’t change at all throughout the film.

The interesting part of this movie is how the creators chose where to put the “choose what happens” options. Throughout “Black Mirror Bandersnatch”, there are parts of the movie where you would suspect for there to be an option and parts where the options come up unexpectedly.

The overall direction of the film was consistent and each choice did have an impact that seemed to work with your choice. The director did a fantastic job with telling Butler’s story and moving the plot along.

The soundtrack of “Black Mirror Bandersnatch” was very mysterious and the music sometimes [led up to a problem of situation that never came.] The lines were spoken clearly and the music was usually just in the background to add color to the sounds. There were some special effects when it came to Butler playing his came or sometimes during his chats with Ritman.

Overall, the movie was very interesting and there were a lot of twists that were unexpected which moved the plot and made the movie fun to watch. As Butler’s story progressed throughout the movie, whether it be because of the people he had come in contact with along the way or the coincidences that pushed the plot forward, as he designs his game it becomes apparent how all of the choices and lives of others have impacted him. This was interesting to see and how he reacted made the ending all more interesting to see and the choices make you second guess yourself a lot of the times.